Commuting in the car means a lot of time spent accidentally thinking about how it could be improved. I’ve come up with several ideas for accessories, and this first one is useless but very fun. For some time I was planning a system where buttons on the dashboard displayed messages on the rear bumper. Stuff like “C’MON, REALLY?” to display to tailgaters, and maybe amusing stuff like “WHAT’S WRONG WITH THIS GUY?” when someone up ahead is driving poorly. It would be a pretty straightforward bank of switches plugged into an Arduino, and either a screen with pictures or (better) a train-schedule type letter sign, if those can still be found.

A few weeks back, however, I remembered that dog picture from the Internet that says “deal with it” when the sunglasses drop:

I realized there couldn’t be a classier way to respond to tailgaters than with a live-action version, so I decided to make one. It would be a simple Arduino project, with a servo that lowers the sunglasses over the eyes of a stuffed dog. Then a relay would light up the “Deal with it” text on cue.

Setting up the Arduino code and wiring the components didn’t take more than a few hours:

Then there was the simple matter of printing out some sunglasses and attaching them to a servo (cardboard backing, super glue, and a zip tie for the arm):

Finally the sign had to be prepared. I decided to go all out and buy a real neon sign, since that is totally fantastic and you can get them custom-built. The sign arrived with this nice label: 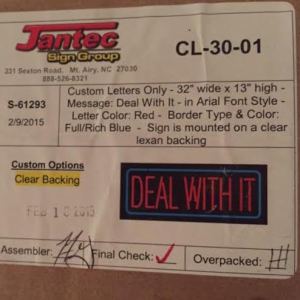 I also opted to buy a pre-packaged relay to switch the sign, since I’m not a trained electrician and you don’t want to trifle with AC power from the wall outlet. The PowerSwitch Tail II is great, you just plug in 5V and ground wires to the side and it works like an extension cord with a switch. The rest of the wiring was just a couple of leads going to 5V and ground, and one pull-down resistor for the button. I also got a 300 watt inverter to provide power from the car battery, and a big red button to activate the sign. Wiring it all together for a test run, it looked pretty good:

The sign turned out to be bigger than I had figured, and it takes up the whole back window of the car. Luckily it has a clear backing so my view isn’t obstructed. There’s still some polishing to go, but it’s working very well.

Nobody has tailgated me anywhere near the threshold level for sign-activation yet (perhaps this is rarer than I thought) but it’s bound to happen eventually. You know when you’re waiting in a line of cars to pass a slow-moving truck, and some chucklehead decides to tailgate you, so that maybe you’ll do the same to the car in front and so on (I assume)? The next time that happens to me, I’ll press this button on the dashboard:

And I’ll take my sweet time to finish the pass. Meanwhile the offending driver will see this:

2 thoughts on “Fun with Tailgaters”